WARNING: Beware of claims that numismatic coins are not or would not be subject to a government confiscation of gold and gold bullion coins as President Roosevelt did in 1933. There is no basis for such assertions, and such assertions are usually accompanied by promotions of old US coins at prices well above real market prices. Unsuspecting buyers of such promotions have suffered immediate losses of as much as 50% of their investments. See Horror Stories for case histories of some such losses.

Additionally, beware of claims that numismatic coins offer “leverage,” that they go up in value in rising markets more that bullion prices. For example, it is common for telemarketers to say, “For every dollar gold goes up, numismatic coins go up three dollars.” There is no substance to such claims; there are no authoritative studies to support such claims.

Have you had a bad experience with collectible coin dealers? You are not alone. Read Horror Stories from other investors like yourself.

Franklin Mint coins, which are mostly silver, are examples of collectible coins. Rarely do such coins attain real collector status. Additionally, the US Mint, along with other government mints such as the Royal Canadian Mint and Australia’s Perth Mint, produce modern collectible coins, most of which rarely hold the premiums at which they are sold. 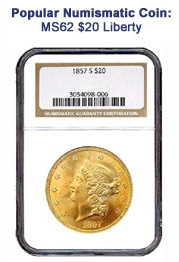 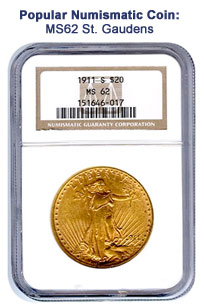 Further, because of the widespread promotions of MS69 and MS70 modern Gold Eagles, it is really important to know that these coins are not numismatic coins, despite their high grades. And, they are not collectible coins. They are modern gold bullion coins that have been submitted to grading services solely to give the coins greater value for promotional purposes.

Nearly all new American Gold Eagle Bullion Coins submitted to the grading services come back either MS69 or MS70, which gives them greater perceived value. After all, MS70 is the highest grade any coin can receive. When buyers go to sell MS69 and MS70 Gold Eagles, they learn that their coins are fancy-dressed bullion coins. See our article PCGS, NGC Coin Grading Scam Alert.

Old US silver dollars are the most widely-collected coins in the world, which makes them favorites of some telemarketers. However, most telemarketers prefer to promote gold coins.

Should you become a coin collector?

Many people find coin collecting a very enjoyable hobby. Across the United States, there are coin shows nearly every weekend, from small, local shows to the huge events such as the annual ANA Convention, which moves around the country, to the Long Beach Show and the Baltimore Show.

At the mega events, millions of dollars of genuine collector coins are exhibited, and dealers do millions of dollars in business, with knowledgeable collectors and other dealers. The ANA Convention is such a big draw that the US Mint always has a huge exhibit. And, other government mints from all around the world display their coins.

The government mints are not there because of genuine numismatic coins but to promote the collectible coins that they sell. However, the US Mint displays some unique old US coins, old private-mint coins and gold bars, which are delights to see.

Coin collecting can be rewarding, even financially. Many of today’s numismatists who make their livings buying and selling coins began as hobbyists. People who enjoy going to coins shows on weekends, spending their evenings leafing through auction catalogs, studying gold coins and meeting with other collectors may do quite well buying numismatic coins.

If you have been in contact with a telemarketer and are tempted to buy, give us a call before buying. We have real market prices for all the “semi-numismatic coins” that are commonly promoted. By talking with us, you can quickly learn the real market prices of the coins that you are being offered.

If, by chance, you are thinking of buying an expensive numismatic coin, give us a call. We have associates who have dealt in numismatic coins for decades. Often they can provide insight into fair prices. And, our associates sometimes will offer opinions about certain coins.