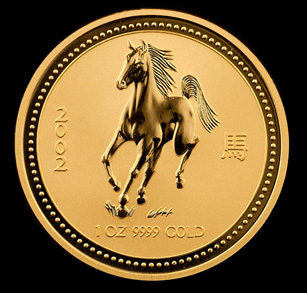 One, the horse is the second most popular animal in the Lunar Calendar. Two, the horse is a favorite animal in the Western World. This is especially true in the United States, where Americans have been brought up on Western movies and where thousands of Americans keep horses for enjoyment. Additionally, horse racing is one of the most popular spectator sports in the Western World.

Because 1-oz Gold Horses now carry hefty premiums, CMIGS recommends that gold bullion coin investors go with the year 2001 Gold Snakes, which can be bought at the same price as the American Gold Eagles. However, coin collectors wanting to add collectible 1-oz Gold Horse coins to their collections will have to pay the premiums. With only 30,000 coins having been minted, it is likely that 1-oz Gold Horses will continue to carry big premiums.