The entire purpose of modern economics is to obfuscate the truth; to convince the masses to support policies that are contrary to their own interests. In the early twentieth century, economists in the United States realized the opportunity to transform their lot in life from that of dreary academicians to well paid pseudo-celebrities by becoming propagandists for the newly created central banking state. The tools of their trade are a combination of complex jargon and endless mathematical analysis of irrelevant minutia. All designed to get the eyes of the average person to glaze over and relinquish their will to that of the “experts” – because anyone capable of comprehending such a blizzard of terminology must know what they’re talking about, right?

Alfred Marshall once told a fellow economist: 1) Use mathematics as a shorthand language, rather than as an engine of inquiry. 2) Keep to them till you have done. 3) Translate into English. 4) Then illustrate by examples that are important to real life. 5) Burn the mathematics.

So while the Fed sponsored economists are busy solving sets of partial differential equations that prove money printing is good (for them), lets take a look at one of the tenets of Keynesian economics in plain English.

John Maynard Keynes believed that when the private sector economy was struggling, it could be spurred into growth by public sector deficit spending. In other words, by incurring a temporary deficit, private sector growth could be revitalized to the point where the additional tax revenue generated would eliminate the newly created public debt. Keynesian economics predicts a cyclical public deficit – one that rises temporarily, then returns to zero, over and over…

The good news is we no longer have to debate theory. We’ve done the experiment. Nearly 42 years ago the US government formally severed the last remaining link between the dollar and gold and turned over the US economy to the central planners. So how well did Keynesian economics work? The cyclical deficit tells the story: There is none. Our deficit is all structural. 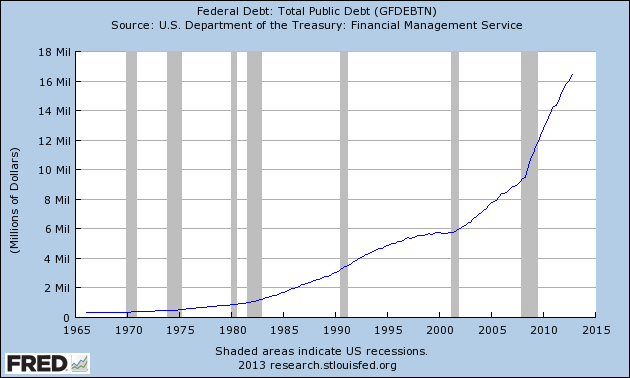 See? Macroeconomics isn’t that hard after all. In fact it’s mostly common sense. Paul Krugman insists that the economy of a household is fundamentally different than that of a country, but that’s nonsense. To acknowledge otherwise might suggest that we are capable of making our own decisions regarding economic policy – which we are. So with that in mind, answer this question for yourself: What eventually happens to the standard of living of a household that continually lives beyond its means?

9 Responses to “Keynesian economics debunked in one graph”