On October 24, 2019, I posted a bullish flag pattern, wherein gold appeared ready to break out to new highs, above the $1500 level.  It did not. Prices fell from there.  However, as prices fell, they did not violate the flag pattern.  They merely extended the pattern. 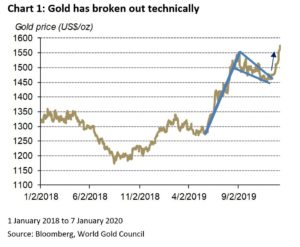 Recently, though, gold prices did break out of the flag pattern to the upside, as can be seen in the graph .  As noted in the prior post, “This pattern is especially bullish because gold has been moving up since 2015, meaning a continuation move to the upside.”

As I also noted in the October 24 post, “It will be interesting to follow the price of gold over the next few months.”  Not only interesting, but quite profitable to investors who added to their gold holdings.  In the recent move, gold touched $1600 intraday.