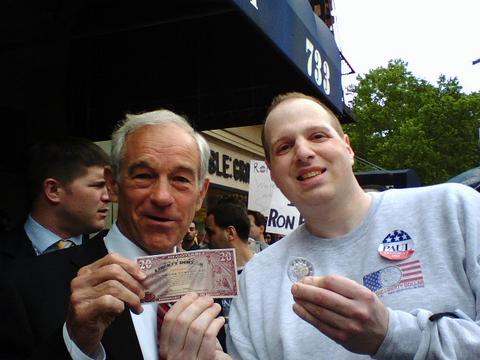 Would you buy a stock that you believed would be worth less in the future?  To most, that is a silly question with an obvious answer.  But what if I asked, would you agree to be paid in a currency that would be less in the future?  To most, that is a question they have never pondered, although the answer would seem just as obvious.  The difference between the two scenarios is choice.  You have a choice when purchasing a stock, or whether to purchase at all, but no such choice when it comes to money.  But what if you did have a choice?

It has become increasingly apparent that the United States has accumulated more debt than can ever be paid back through direct taxation.  Sustainability of the current policy of endless budget deficits is completely dependent on currency debasement – the now official stated policy of the Federal Reserve.  This is nothing more than a massive indirect tax on the savings and standard of living of those who use dollars.
To some degree you can opt out your savings by converting to a non-debase-able form of money such as gold or silver, although the government will still claim part of the dollar debasement you avoided by taxing your “gain.” But how do you opt out your standard of living from this wealth confiscation system if you’re paid in a fixed amount of ever depreciating dollars?  The answer is: you can’t.  The law prohibits it.

The solution is Ron Paul’s Free Competition in Currency Act.  It has three primary provisions that break the government’s monopoly on money:

It’s really as easy as that.  We as individuals can’t save the government from its self-destructive habits, but we need to be able to protect ourselves.  For the “gold is a barbarous relic” crowd, that feels “gold as money” is a horrible idea, no problem. That’s what free competition is all about.  There is absolutely nothing that prohibits them from continuing to use Bernanke’s infinitely dilute-able virtual dollars as their monetary means of choice.  For the rest of us, sound money would do nicely thank you.