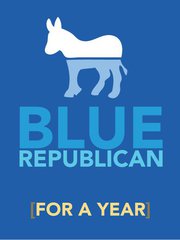 One of Gerald Celente’s predictions has been for the rise of a “progressive libertarian” movement in the United States; wherein members of both the left and the right, who have been abandoned by Washington DC, join forces. Robin Koerner, a Democrat, and Obama voter in 2008, has written a superb piece for the Huffington Post, which seems to have struck a chord with alienated Democrats. He has put forth a particularly convincing argument that, Democrats who truly believe in the cause of peace and personal liberty, are compelled to vote for Ron Paul in 2012.

But what is particularly savvy about Mr. Koerner’s article is that he understands the real fight for Ron Paul is not in a potential general election, but in the Republican primaries. For Ron Paul is just as much an outsider, and foe of the so called neocons, as they are. Take a look at this recent graphic posted on The Morning Joe as an example of just how much the GOP establishment fears Ron Paul. Even though Dr. Paul would rank #2 on this list, he isn’t even presented to the American public as being a candidate. www.ronpaul2012.com shows more than $4 million raised second quarter. 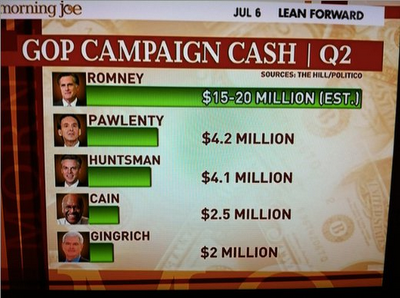 Mr. Koener’s argument is that we have reached the point where we must look beyond the traditional labels of Republican and Democrats, and vote for principles. He points out the Dr. Paul is really a Libertarian who understands that, in a two party duopoly, you must use the system to your advantage. To that end, he is is encouraging Democrats to do the same. And to officially register as Republicans, for a year, in order to vote for Ron Paul in the primaries. He’s even come up with a catchy moniker to rally support around: Blue Republicans.

I’ve been watching this article since is came out yesterday, and while it hasn’t really gone viral yet, I think it could. Just reading through 75 comments or so, it’s becomes obvious that Mr. Koener has struck a chord with frustrated Democrats (and Independents). His Blue Republican “manifesto” appears to have the right mix intellectual and emotional justification to get people excited. He has also provided a way for them to make a difference through a specific course of action. Already in the comments, a number of Democrats stated that they had just registered as Republicans in order to support Ron Paul in the primaries.

I also see there is now a Facebook page started for Blue Republicans, complete with logo.

The original article is well hidden, deep within the Huffington Post site. I encourage you to send the link to friends to who believe in the cause of peace and personal liberty, and that may not realize that their candidate currently resides in the Republican party.  Further, Ron Paul is the only candidate that has exhibited any evidence that he understands the importance that sound money plays in a sound economy.  In short, Dr. Paul understands gold.