On Friday, Treasury Secretary Jacob Lew sent a letter to House Speaker John Boehner, informing him that the Treasury will begin taking “extraordinary measures” in order to keep the Federal debt below the legal limit. Such measures could include redeeming current investments in the retirement accounts of civil service workers and would keep things running up through Labor Day.

As you may or may not recall, the last time we butted up against the debt ceiling in late January, Congress opted to push the issue out until mid May. They did so by allowing the debt ceiling to reset to its then current value of $16.394 trillion plus any additional borrowing required to keep things going through Saturday May 18th. (It is interesting that when a discussion of raising the debt limit enters the public realm, there is increased interest in gold and silver.)

“The global economic leadership position enjoyed by the United States rests on the confidence of Americans and people around the world that we are a nation that keeps its promises and pays all of its bills, in full and on time.”

Mr. Lew did not explain how paying back loans with an intentionally depreciated currency honored the spirit of keeping promises and paying bills in full.

Meanwhile the Congressional Budget Office is reporting that the budget deficit is falling fast due to much higher than expected tax revenues and an increase in payments by Fannie Mae and Freddie Mac. At the current rate they expect the 2013 deficit to fall to just 4% of GDP — close to the 3% that is considered sustainable as it matches long term economic growth rates. But even better, the CBO is predicting a debt to GDP of just 2.1% by 2015 and that it will remain below 3% through 2019. The net result will be a reduction of the total publicly held federal debt to GDP to 71% by 2018-2019.

At first glance that seems like a huge decrease since the current debt to GDP is over 100%. However the CBO specifically excludes, among other things, the debt already monetized by the Federal Reserve, in its total debt denominator. In reality, 71% is only slightly below where we are now. What is interesting about this approach is that it agrees with Ron Paul’s proposal to write off debt already monetized by the Fed. A surprisingly easy solution to the debt ceiling issue, but one that is not taken seriously, as I suspect it would too effectively illustrate the fraudulent nature of central banking to those who do not currently understand it.

Another interesting nugget regarding the CBO is the description of its fears of a long term increasing debt load:

“One is so-called “crowding out” in the medium and long run. In other words, to support higher spending, the government must either raise taxes or borrow more from investors. That would leave less money for the investment in the private sector and productive capital, such as factories. In turn, that can hurt economic output and incomes.”

Isn’t that a rebuke of the entire Keynesian philosophy of using public spending to spur private growth? Rather, it would seem to agree with the notion that government spending kills the real economy.

As far as reducing the the debt to GDP via economic growth, there doesn’t seem to be a strong precedent for it. In the last 33 years, there is only one small period of decline — under Clinton no less, and a far smaller associated burden imposed by the Federal government. 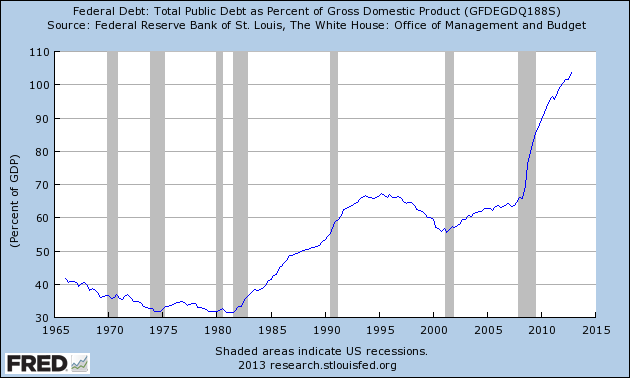