As can be seen in the graph, the world’s central banks were sellers of gold up until the 2008 World Financial Crisis (WFC).  After which, they became strong buyers, with the last six quarters seeing significant buying.

Prior to that, in the late 1970s,  the US Treasury and the IMF coordinated auctions.  The US excuse was that it would ameliorate the balance of payment problem; the IMF said it was going to use the proceeds to provide relief to poor nations.

That was at a time when balance of payments was an issue of concern.  That is no longer the case, but the sales did suppress the price of gold. 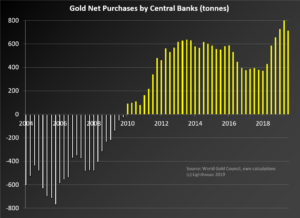 The BoE announced before-hand that the auctions would take place, which put huge pressure on the price of gold.  The IMF and US Treasury sales were widely publicized.  In actuality, Establishment central banks were attempting to “manage” (suppress) the price of gold.

Now, though, non-Establishment CBs are big buyers of gold.

Russia is the 3rd largest gold producer and the 5th largest holder.  And, it is a regular buyer.  A Russian central bank executive has noted that gold is a “100% guarantee from legal and political risks.”  The US has imposed economic sanctions on Russia and many of its oligarchs, sanctions that make it difficult to do business anywhere in the world.

Turkey, Poland, United Arab Emirates, Qatar, Kazakhstan, Kenya, and the Kyrgyz Republic were other countries adding to their gold reserves.

As for China, the #1 gold producer, there is no way of knowing exactly how much gold it holds, despite their reporting (from time to time) how much gold the Bank of China has purchased.  China, the largest gold producing country, prohibits the exportation of gold, which means that the nearly 400 tons it produces annually remains in China.

Only bars with hallmarks approved by the London Bullion Market Association (LBMA), stamped 99.5% purity or higher, and weigh 350 to 430 troy ounces are eligible to be counted as reserves.  It is suspected that China holds much gold that has not yet been refined to “good delivery” standards or that it has chosen not to update its holdings.

Further, there is speculation that the reason the US’s gold has not been audited since the Eisenhower administration is that much of its gold does not meet good delivery standards.  This is a reasonable speculation in that millions of ounces in 90% gold coin were turned in during the Franklin Roosevelt “gold call-in.”  At the time, the US hinted that it would someday return to the gold standard, under which paper dollars could again be redeemed in gold coins.  But, as we know, that did not happen.

Such developments, of course, would result in gold (and silver) appreciating in price.