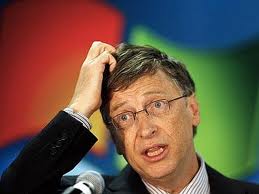 Well, we’ve heard from Warren Buffet and Charlie Munger on the subject of gold. Looks like it’s time for their young protégé Bill Gates to jump in the ring and throw a few wild punches. Next time though, guys, how about a few dry runs off camera first? It’s pretty clear that Mr. Gates was completely disoriented when it came time actually to perform the task at hand. After waxing nostalgic about the days when he and Warren bought a bunch of silver, he momentarily regained some of his bearings and fired off this gem:

“If central banks or the IMF ever decided to take advantage… and I think countries need liquidity, you know, hey… there’s an asset that’s not doing anything for the citizens…”

Sure, Bill. Why on Earth would a central bank sell gold to raise liquidity when they have the legal authority to counterfeit money?  That’s the whole genius of the system. They don’t have to sell anything, they don’t have to work for anything, they simply create new digital currency units on their computers. They really only have one job, and that’s to keep everyone’s attention focused on paper and away from gold. Which brings us back to the task at hand…

Uh oh, don’t look now but it appears that Mr. Gates has lost his way again… stumbling badly… not sure where to go. Perceptions of future value… price floors… jewelry buyers… desperately looking for a way out of his incoherent rambling, he falls back on technology with some mysterious reference to digital mining techniques.

Digital mining to produce endless supplies of cheap money? Isn’t that actually a description of how central banking works? I’m not sure he’s actually grasping the finer points of those Bilderberg seminars he attends.

Ok, going to my gold basher’s grade card now, I’m going to have to give this performance a D-.  Absurd arguments and zero confidence in the delivery.  Hey, Bill, next time you’re asked, just remind them you can’t eat gold and follow it up with a good hearty laugh. You really can’t go wrong with that one.