Even Ethan Hunt couldn’t crack these…

Bank heists are extremely difficult to pull off, no matter what Hollywood might have us believe. Some vaults are so secure that robbers have heart attacks even thinking about breaking in.

With that in mind, check out these 15 Most Impenetrable Bank Vaults from recent history and see to what extremes countries (and some private companies) will go to keep the deposits and valuables of their clientele absolutely protected.

If a bank robber was somehow able to get through the solid granite wall perimeter and past the squadrons of machinegun wielding guards and armed military, the thief would still have to contend with a 22-ton vault door. That 22 ton blast door is held shut by a lock so intricate that it requires a 10 person team to unlock. Is it really any wonder that Fort Knox has never even had a published robbery attempt? 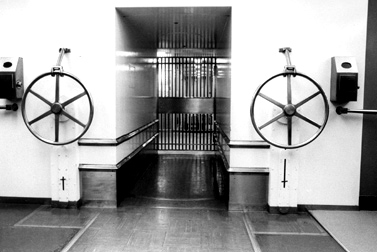 Deep below the streets of Manhattan sits a vault so impenetrable that it’s entrusted with more U.S. gold bullion than the famous Fort Knox. Security is so tight that men aren’t allowed to enter the vault; pallets are moved around by a team of robots.

The bank’s security systems are so trusted that even foreign governments use it for gold storage. And – as if that wasn’t enough – a Jason Bourne level protection force watch the perimeter; their shooting range scores are so good they’re better than marksmen.

3. The Bank of England Gold Vault If Britain’s Prime Minister had a secret, he would want to keep it here. More than 4,600 tons of gold are safeguarded in what is the UK’s largest gold vault. A figure that’s second only to the Federal Reserve Vault mentioned above.

The vault walls are bombproof and so sturdy that bank staff used them for protection during WWII air raids. And when the vault doors do need to be opened, they can only be accessed by an elaborate system consisting of voice recognition, 3 foot keys and other unpublished security measures.

In 1957, the same type of vault used in the London Silver Vaults was used as part of U.S. nuclear testing in Nevada. The 37-kiloton nuke tore away steel reinforcement and loosened trim but didn’t bust the vault. 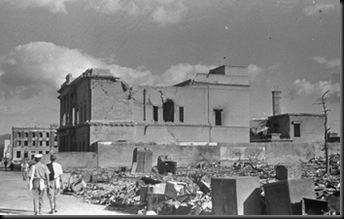 Once the U.S. government learned how to control the finger of God, the first order of business was to wipe the city of Hiroshima off the face of the planet. Skin melted from charred flesh… buildings fell like towers of playing cards… grass was parched to dust… water evaporated immediately… and two Mosler bank vaults were undamaged.

How’s that for an advertisement? Good enough for the Mosler company to trumpet that their vaults could withstand an atomic bomb in their advertising for the next 10 years.

6. The Gold Vault in Dubai

Dubai, known as the City of Gold, finished building a vault to hold all that metal in 2009. The vault is located in the Dubai Multi Commodities Center and incorporates the latest and greatest in security measures. Dubai is in the process of repatriating their gold from London now that they have one of the most secure facilities in the world.

Crime thrillers usually have talk of a Swiss bank account. There’s a reason: Swiss banks are among the safest on the planet. The 3-key safety deposit box in particular has been used by the World’s most wealthy citizens for over 200 years. Interesting note: the first deposit box prototype was patented through the same office that employed a young Albert Einstein as a clerk. What makes the vault holding Iran’s gold reserve impenetrable is that nobody can say for sure where it is. One could assume the vault is either in the Imperial Treasury location or the Iran Central Bank, but you know what they say about assumptions. Iran secretly flew gold into the country from Europe in order to dodge “financial pressure” from the US and UK. Now that the reserves are back within Iranian borders, the location of their holding vault is as elusive as Iraq’s WMDs.

The Antwerp Diamond Center was swindled of $100 Million worth of inventory when a team of Italian thieves beat their “impregnable” defenses in February, 2003. The thieves got past body heat detectors, Doppler radars, magnetic fields, motion detectors and an incredibly advanced locking system. The police still can’t figure out how the team did it.

As the global economy suffers more people are plowing their money into gold to hedge against inflation. This spells opportunity for JPMorgan Chase, who swung open an underground vault in Manhattan. If that back of the vault door doesn’t intimidate you, the scowl on that man’s face should. A bank in Cleveland, Ohio has the largest vault door on the face of the planet. Granted it isn’t just any bank, it’s the local Federal Reserve. Ohio isn’t the picture I get in my head when I think ‘bank heist.’ And for the record, the vault door weighs 91 tons… the equivalent of two humpback whales.

This picture captures the aftermath of atomic bomb testing under the codename Priscilla that occurred in June, 1957 in the Nevada desert. What you don’t see in the picture is the bank vault that withstood the blast… another Mosler engineered vault. The 37-kiloton triggered blast did this to concrete and steel, but left the (unbreakable?) vault intact. The Broker Restaurant (Denver, Colorado) may be the safest restaurant in the country. In 1903 the building was the Denver National Bank. Today the building serves exquisitely prepared dishes in the very room where countless millions were counted and deposited back into safety deposit boxes.

At it’s heyday in 1914, the Dominion Bank Building in Toronto, Canada was considered the most secure bank vault in the entire world. Because it was constructed on bedrock and wrapped by surveillance passages, tunneling into it was a practical impossibility. Maybe an Ocean’s 12 style infiltration would work… but let’s not forget the 40-ton vault door. The door was so airtight that a single hairpin would keep it from closing. Good luck cracking this vault.

The Hard Rock Vault, first opened in 2001, is guardian to hundreds of priceless musical treasures from Jimmy Hendrix’s Flying V to John Lennon’s handwritten lyrics for “Instant Karma.” It’s situated below Hard Rock Cafe London in what used to be Coutts Bank. In terms of security, the vault once held the Queen’s treasury before Coutts Bank was converted.

75 Responses to “15 Most Impenetrable Bank Vaults”